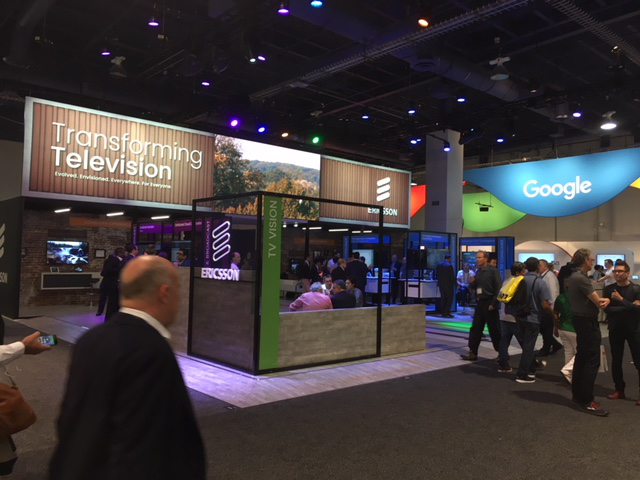 Ericsson Media Solutions’ three constituent product areas – compression, delivery and platforms – can all continue to deliver growth following completion of the acquisition of a majority stake in the business by One Equity Partners, according to company executives.

Following completion of the current ‘carve out’ process, One Equity Partners will be the 51% owner of the business, with Ericsson retaining a 49% stake.

“We should be through that process by the end of the year. We will have a new name and a new brand but will retain our relationship with Ericsson,” Mark Russell, CTO and head of strategy told DTVE at the NAB Show, the first major trade show at which Ericsson Media Solutions has exhibited since the change of ownership announcement in January.

“It covers everything from acquisition to contribution to distribution. We have a pretty broad presence in the space,” said Russell.

Russell said that uncertainty about the future of the business ahead of the January deal had “some impact” commercially, but added that Ericsson had engaged with customers to inform them about what was happening. “We have engaged with all of our customers and kept them apprised and updated,” he said. “Our customers were appreciative that we did things openly during the process. Our conversations with them have been quite positive,” he said.

Russell said that in broad terms, both vendors and customers were consolidating as the media business undergoes rapid transformation wrought by changing viewing patterns and technology development. “The gravitational forces are towards consolidation,” he said.

At the technology level, he said that there is a broad transformation of media workflows towards a primarily OTT all-streams approach. “OTT is not a sidecar. It is the main thing. All of those workflows are being remapped around that and we want to play big in that space. We have underlying assets that we will employ and we’ll look at other avenues to fill the portfolio out,” he said.

He said that managed delivery and OTT will cohabit in a single platform.

On the compression side, Ericsson wants to surf the coming UHD TV wave. “The company will invest in AV1, but it is hard to gauge whether it will become a dominant codec, or something that allows the HEVC [community] to coalesce,” he said. “As a primary player in the industry we need to support those trends.”

On the delivery side, Ericsson will expand its media delivery platform to handle both unicast live and multicast live content as well as applications such as cloud DVR, he said.

On the platform side, Russell said that Ericsson would support the main industry ecosystems but would not try to further develop a proprietary solution. “We’ve put energy into the Android ecosystem but I have to say we are taking a balanced view of RDK as well. We want to be on the main industry-wide ecosystems rather than create our own underlying middleware stack,” he said.

Also speaking to DTVE at the NAB Show, Gowton Achaibar, COO and head of R&D,said that customers understood the logic of creating a standalone entity with revenues of US$400-500 million from the much larger Ericsson. “A standalone business has the power and freedom to allocate capital independently,” he said.

Achaibar reiterated that Ericsson’s compression, storage and delivery, and platforms products can all deliver growth. He said the company had a wide range of customers across all three of its key product areas, with some buying all three and some choosing to mix Ericsson solutions with those of third-party providers.