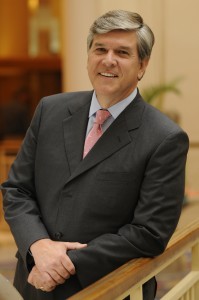 The NAB helped secure “five wins” for US broadcasters from legislators last year, including US$1 billion in funding to help them cope with relocation of broadcast signals as a result of spectrum reallocation, according to NAB president and CEO Gordon Smith.

Speaking at the opening of the NAB Show in Las Vegas, Smith said that the passing of legislation to reimburse stations during the spectrum relocation process was a key win that meant broadcasters did not have to pay relocation costs as a result of the loss of their spectrum.

Congressman Greg Walden of Oregon, head of the House Energy and Commerce Committee with oversight over broadcasting relocation costs, speaking with Smith at the NAB Show, said that establishing funding for broadcasters had not been easy, but that it had been important to secure this.

Walden said that transmission tower companies in the US would now be under pressure to move the process forward. “I wanted to make sure the relocation fund was fully funded,” he said, with US$600 million of funding to be disbursed this year and US$400 million next year.

The other four of the “five wins” over the past year highlighted by Smith were the FCC’s approval of voluntary deployment of ATSC 3.0, the defeat of recording companies’ “attempt to tax radio stations” for playing music, the defeat of a tax proposal on advertising and the FCC’s updating of media ownership rules.

Taking forward the move towards ATSC 3.0, Smith highlighted the trial of next-generation TV in Raleigh, North Carolina during the Winter Olympics from Korea, and an initiative in Cleveland, Ohio, as well as further trials in Phoenix and Dallas.