EY: online video revenues in MENA to grow by up to 35% annually

Online video revenues are projected to grow by 22%-35% annually in most markets in the Middle East and North Africa (MENA) region until 2021, according to a new report by EY. 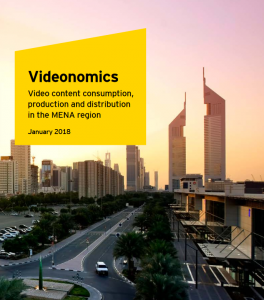 The Videonomics report claims that MENA digital consumption growth is among the highest in the world, thanks to a large youth population, fast-improving mobile connectivity and new streaming platforms coming into the market.

As a result, the study predicts that digital’s share of overall video revenue in the region is due to grow from 9.6% in 2017 to 17.3% by 2021, with online subscription and video ad revenues expected to show strong growth.

“Digital video revenues and viewership are set to grow to by at least 22% annually till 2021 in the MENA region. To ride this new wave, content creators will need to focus on multi language offerings, partnerships across the video value chain, analytics and customer centricity,” said Nripendra Singh, director, media and entertainment, EY Africa, India and the Middle East.

The report claims that in the UAE and Saudi Arabia total time spent online – both watching video and doing other tasks – is now equivalent to 70%–90% of time spent watching TV, with linear TV consumption “largely stagnant on a global level”.

On the TV front, EY notes that the MENA region has long been dominated by free-to-air channels and ad-funded business models, with these accounting for more than 90% of viewership in markets like the UAE, Saudi Arabia and Egypt.

While the region has seen some 500 free-to-air channels added over the last decade, ad revenue growth has slowed and is now “nearing saturation” having recorded negative growth in 2016/17, according to the study.

EY expects pay TV revenues to grow 7%–8% in the medium-term as satellite pay TV operators continue to add some 10–15 HD channels each quarter. These gains are expected despite the “major threat” of piracy.

The findings come in the same week that Digital TV Research predicted that MENA pay TV revenues will grow between 2017 and 2023 but at a lower rate than subscription numbers, indicating that average revenues per user (ARPU) must be falling in the region.