One in five French web users ‘following on’ viewing across screens

Over one in five internet users in France now start watching TV shows on one screen and finish watching the same programme on another, up five points on the figures for 2015, according to audience research group Médiamétrie. 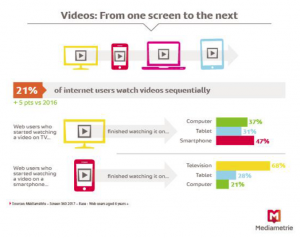 According to the ratings outfit, 47% of ‘sequential’ viewers who start watching a show on a TV screen finish it on a smartphone, with 37% finishing the show on a computer and 31% on a tablet.

Of those who start watching on a smartphone and finish on another device, some 68% pick up the show they were watching on a TV screen with 28% picking up from where they left off on a tablet and 21% watching on a computer.

According to Médiamétrie, 35% of internet users have now connected their computer to the TV set, with 70% doing this to enjoy the benefits of a larger screen size and 53% to watch videos stored on their computer.

The research outfit also found that 54% of internet users have gone online to search for content associated with a TV programme, while 29% have written or read comments about the programme they are watching. About 18% of 15-24 year-olds comment on programmes, mostly via mobile devices.

The average French home now has 6.4 screens. The TV is the preferred screen for web users as a whole aged six and over, with 91% preferring this screen.

Tablets are mostly favoured by children. The number of 6-14 year-olds using a tablet grew by 10 points to 67% last year, compared with 46% of those aged six and over.

Médiamétrie’s Screen 360 programme conducted an online survey of 4,000 internet users aged six and over in June 2017.