Sports fans typically watch more TV than other consumers and are “significantly more likely” to have pay TV and subscribe to premium channels, according to Ampere Analysis. 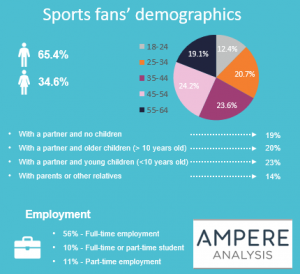 The research firm found that in the UK some 74% of sports fans have pay TV compared to 62% of other viewers, with viewers over the age of 35 more likely to pay for sports compared to younger fans.

Roughly 20% of UK viewers aged 35-64 said they would pay for English Premier League compared to 14% of viewers aged 28-34 – in contrast to some other markets where younger viewers are more willing to spend on sport.

Across a wider sample of 14 markets, Ampere’s data showed a broad spread of sports fans aged 18-64 watching sport on TV, with viewers aged 35-54 accounting for almost half of the audience.

The majority of sports fans were found to be of working age, 56% were in full time employment, while 65% were male – though some gender variation was noted between countries with the NFL in the US attracting more female fans than the English Premier League.

Ampere polled 28,000 internet users across 14 markets to evaluate their willingness to pay for sports content. Some 42% of viewers defined themselves as sports fans and of those a massive 98% said they were prepared to pay to watch sports.

“With sports fans so overwhelmingly eager to pay to access their favourite competitions, there is tremendous scope to further monetise sports on TV,” said Ampere research analyst Alexios Dimitropoulos.

“The challenge will be to balance the enthusiasm for niche competitions, particularly evident amongst younger viewers, with the demand for big ticket events such as the Champion’s League.

“Online services have a chance to maxmise this demand, with an expanded offering of sports events, and that’s why we’re seeing Facebook, Amazon and Twitter, amongst others, make their first forays into this space.”

The countries covered by the research were Australia, Brazil, Denmark, France, Germany, Italy, the Netherlands, Poland, Saudi Arabia, Spain, Sweden, Turkey the UK and the US.

Ampere previously revealed that the UEFA Champions League is the sports competition that viewers are most willing to pay for, with 8.8% saying they would be willing to pay to regularly watch the football tournament compared to 7% for the FIFA World Cup.