Video measurement and analytics company Conviva recorded a 100% increase in viewing hours across its global customer base last year at 12.6 billion hours. 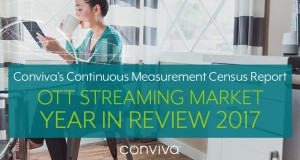 In its ‘2017 OTT Streaming Market Year in Review’ report, Conviva said that these viewing hours were distributed across 2.4 billion devices and predicted continued accelerated growth over the course of 2018.

“Conviva has seen the viewing hour growth rate accelerate over the past several years as more consumers move their TV watching from traditional linear pay TV services to a very wide variety of OTT services offered by both pure play OTT publishers and MVPDs as well as pay TV providers diversifying their service offerings,” according to the report.

The viewing hours by region broke down to 58% in North America, 21% in Europe, 19% in Asia, and 2% around the rest of the world and were initiated by 38.8 billion total plays, a 74% growth from the same period last year.

Conviva said that by December 2017 the traffic on its platform was 36% in-browser video and 64% from video apps. This was the opposite of the breakdown it saw in December 2016 and translated to 160% growth in video app attempts, and just 23% growth in browser attempts.

“While much of Conviva’s publisher base continues to support and embrace both native apps and a variety of in-browser player frameworks, this data shows that over the course of 2017 consumer preferences shifted from browser-based streaming to native apps,” said Conviva.

The study said that out of a total of 47.1 billion attempted plays in 2017, 38.8 billion successfully started the video, while the remaining 17.7% resulted in a video start failure or an exit before the video started.

The report was based solely on Conviva’s customer base, which it says covers close to 60% of the internet population and measures seven out of the top 10 SVOD providers in the US, as well as many other OTT providers globally.

Conviva says that its global data set is comprised of viewer data from more than 180 countries connected to the web by over 1,200 internet service providers.