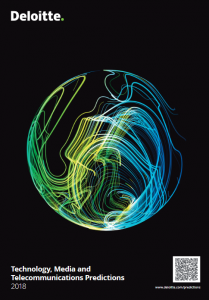 The Technology, Media and Telecommunications study said that in each market this rate of decline be similar to that seen in the past seven years and predicted that TV viewing will continue to fall in this range through to 2023.

“The decline is neither exacerbating nor improving; there is no tipping point, and viewing is not collapsing,” according to Deloitte, which expects 18-24 year-olds in all three markets to watch at least 80 to 120 minutes of TV per day in 2018, varying by season.

The report said that in the past five years millennials, particularly younger millennials aged 18-24, have been “lured” by smartphones, computers, social media, video piracy, shortform services like YouTube and SVOD services like Netflix.

However in the US, Canada and the UK it claims these distractions are “reaching saturation” and are showing flatting annual growth in penetration and use.

In light of this it predicted that by as early as 2018, but very likely by 2020, the erosion of TV minutes may slow, even if it does not stop altogether.

Deloitte defines ‘TV viewing’ in the US and Canada as live and time-shifted viewing of TV content on TV sets, connected TV devices, computers, smartphones and tablets.

In the UK categorised it as programs viewed on a TV set, either live or time-shifted by no more than eight days, disregarding viewing on other devices.

TV and radio is expected to generate 72% of these revenues, with TV advertising contributing US$188 billion and pay TV revenue US$170 billion.

“Almost all revenue from live events is being generated by traditional formats, but new genres, primarily live streaming and eSports, are enjoying surging revenue, albeit from a low base,” according to the report.

Other Deloitte findings indicated an increasing willingness for people to pay for digital content, which it said will continue to accelerate in 2018 and beyond.

The research estimates that globally there will be 680 million subscriptions to digital services across TV, movies, music, news and magazines this year.

“The massive consumer interest in streaming, mobile, on-demand services and personalisation are significant opportunities in 2018 for both content creators and brands,” said Kevin Westcott, vice chairman, Deloitte, and US media and entertainment leader.

Deloitte also said that by the end of 2023 more than 90% of adults in developed countries are expected to have a smartphone. It predicted that owners will interact with their phones on average 65 times per day in 2023, a 20% increase on 2018.