Sweden’s TV4 to record ‘highest turnover ever’ in 2017

Swedish commercial broadcaster TV4 said it expects to record its “highest turnover ever” in 2017, thanks largely to digital growth. 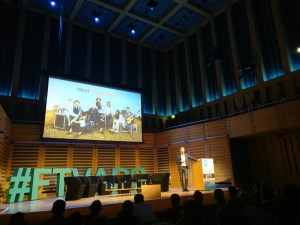 Speaking at the Future TV Advertising Forum in London yesterday, TV4’s chief operating officer and head of business unit advertising at Bonnier Broadcasting, Mathias Berg, said that 2017 is shaping up to be the “best year in our history”.

“We’ve been around for 25 years and this year is going to be our highest turnover ever and we’re going to deliver the highest profit margin ever,” said Berg.

“Digital became [accountable for] significant money a year or two ago for us. However, this year we are growing close to 70% and our digital revenue is really pushing both our top line and our profitability.”

Berg said that one of the guiding principles that has served TV4 well in recent years, during its digital transformation, has been to “trust your content”. He claimed that dividing linear and digital into two distinct functions was now “history” at TV4.

“What used to be a good story still is a good story,” he said. “Today our successful content is as strong on a digital platform, with a digital audience, as it is on linear.”

At the same time, the firm has ramped up the amount of content that it publishes on different platforms. For example, TV4 said it produced about 28 hours of content for the Swedish version of Idol in 2014, whereas it now claims to produce ten-times that number of hours for the entertainment format across all platforms.

Berg also highlighted the importance of data, claiming it is “at the core of everything we do”. Making users log-in to services like TV4 Play means that the broadcaster can get more personalised information than in the linear world, which in turn helps to boost ad revenues.

The firm is pushing towards a single, all-encompassing TV offer for advertisers. “We’re going to make it one television market, platform agnostic,” said Berg.