Pay TV and OTT: when two tribes go to watch 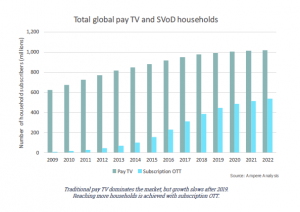 Pay TV operators can defend their revenues and continue to grow, but they need to tap into the growing demand for SVOD and cater to the tastes of ‘content connoisseurs’ – one of five ‘TV tribes’ that marketers must now address – according to research by Ampere Analysis for TV technology outfit Nagra.

Despite growth in OTT TV and SVOD – subscription video-on-demand – in particular, pay TV will continue to account for the bulk of pay video revenues for the foreseeable future, according to Ampere.

While cord-cutting and the rise of SVOD is particularly pronounced in North America, losses here are more than offset by high growth in emerging markets like China and India, with more mature markets in Europe and elsewhere continuing to grow but at a slower rate than previously.

While the US lost 555,000 pay TV subs in Q1 this year, China gained 4.726 million and India 1.977 million, according to Ampere. Overall, global pay TV numbers are expected to top one billion by 2022, with subscription OTT crossing the 500 million threshold. Pay TV will continue for the vast bulk of pay video revenues, even though OTT revenues will grow faster. 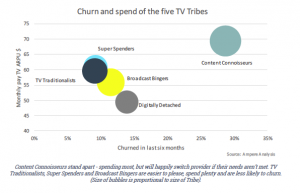 To combat the OTT threat, says Ampere, pay TV operators should look to cater to the growing base of high-spending ‘content connoisseurs’ that accounted for 24% of the market in Q1. This group comprises young, wealthy, high-spending consumers of pay TV and especially SVOD and spends an average of US$70 a month on pay video services.

According to Ampere, content connoisseurs are more likely to churn from pay TV than other groups, but are still the most likely group to subscribe to pay TV services, with three quarters taking a service. They have less interest in premium sports than hardcore pay TV users.

To retain this market, the analysts say, pay TV operators need to offer ‘self-stack bundles’ rather than pay TV-lite ‘skinny bundles’. Content connoisseurs, they say, want to assemble their own à la arte service “combining TV channels, multiple SVOD services, channel-branded OTT, and music streaming” and “want to tap into new services as they become available”. They also want to consume TV on multiple devices. In bad news for multi-play operators, they are typically “less likely to get tied in with a triple-play bundles

The other key tribe for pay TV operators in this five-tribe universe are TV traditionalists, which form a bedrock of the pay TV subscriber base. For this group – middle-aged, middle-market and fans of sports – scheduled viewing remains key. TV traditionalists comprise 18% of the market and spent an average of US$60 in Q1.

“Most importantly for operators, they are less likely to churn than anyone else – just 9% switched provider in the last six months, less than one third of the churn rate of content connoisseurs. Keeping this tribe happy matters to secure stable, recurring revenues,” said Ampere.

Broadcast bingers – 23% – are low spenders that favour box-sets, while super spenders – 17% – are high-spending linear TV aficionados that talk about their favourite shows on social media. The digitally detached – 18% – hare hard-to-reach older consumers that have little interest in pay TV and content.