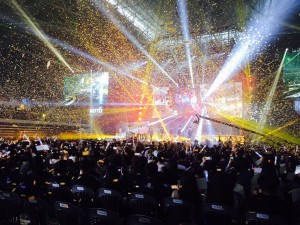 Ginx said the launch was its fourth in recent months following carriage deals in Northern and Southern Europe.

The channel features live eSports tournaments such as the International Dota 2 Championship, E League and Call of Duty World League, together with news, lifestyle, documentary and presenter-led live shows filmed and produced at its central London studios. Michiel Bakker, CEO of Ginx Esports TV said: “Ginx Esports TV is delighted to partner with Sky Italia exclusively to bring our programming to Italian households, lifting our total distribution to over 50 million homes worldwide. GINX Esports TV together with Sky Italia’s cutting edge multi-media network will deliver the best eSports content and the most popular tournament action to Italian viewers, around the clock, seven days a week.”

Luca Revelli senior director partner channels and digital of Sky Italia said: “With the new digital culture redefining the world we live in and modyfing habits and interests especially of the younger generations, Sky opens up to the exciting universe of eSports as it is turning into a major global entertainment trend. At Sky Italy, we are excited to launch Ginx Esports TV as the first channel of its kind in Italy, at a moment in which even the IOC is exploring the possibility of including eSports in future Olympic Games. We look forward to working with Ginx on establishing the channel as the major destination for Italian eSports lovers.”