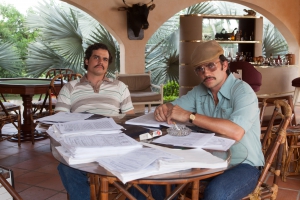 Producers of original drama and other original content in the Middle East need to create shows that can work outside the region and to think more internationally, according to a panel of Arabic producers and broadcasters at MIPCOM in Cannes.

Netflix’s Narcos was cited as an example of content that is related to a specific region and culture, but was filmed partly in English and has broad international appeal.

However, Talal Adnan Awamleh, CEO of Jordan’s Arab Telemedia Group, said that in reality, few channels in the region could support and fund big dramas.

“We have to start thinking globally and more internationally. The market is really based on five to eight channels. Previously the costs [of producing drama] were lower. Now, with the political instability in the region, broadcasters can’t figure out what should be produced, and TV productions need forward planning. What we propose is to bridge the world of finance and production, creating some funding mechanisms and choosing stories that can fly outside the Middle East for more international audiences,” he said.

Talal said that Arab Telemedia was trying to create hybrid language productions in Arabic and English if the story could support it, and highlighted Narcos as a template for this.

“Our mission is to find the relevant stories. To do this you need higher standards and more detailed development of the storylines and more international talent. You also need different distribution and marketing mechanisms.”

Talal said that there is a need for better partnerships between broadcasters and producers to create a streamlining of production. “We are not moving as fast as we should be,” he said. “We can see shows coming out of the States and Europe more strongly than ever. We need to do things in a better way.”

Fadi Ismail, MBC group director of drama and general manager, 03 Productions, said that ratings remained the key measurement of success, followed by the performance of shows on digital services and the number of social media mentions resulting from the appearance of series.

Ismail said that “the ascendancy of pan-Arab drama” was also shown by the exceptionally high ratings for shows like Black Crows and Al Hayba.

He said that advertising remained key to financing content and the region remained too small to grow its high-quality output. The answer, he said, was to think about the international appeal of shows. “We don’t need anything [extra] to create content that can travel,” he said, in terms of the stories and types of drama series being created.

Joseph Husseini, head of channels, MTV Lebanon, highlighted the role of Studiovision, MTV’s production facilities outfit, in stimulating content creation. He highlighted Al Hayba as a show that could have international appeal. “Narcos has succeeded worldwide. It is a story based in Colombia. Al Hayba is like Narcos but with a Lebanese subject,” he said. He said the show had huge ratings even in traditionally non-primtetime slots.

Husseini said that Lebanon was “a little bit different from the Middle East” in that drama shows could premier all year round, not just in Ramadan.

He added said that the market is becoming more crowded, with major international channels moving into scripted content – like Nat Geo with Genius. He said that House of Cards is popular in the Middle East and there would be more competition between digital services and analogue TV, with the former likely to win in the future.

Khulud Abu Homos, CEO, Arab Format Labs, highlighted the role of innovation in formats in stimulating content creation. The Saudi Arabia-based company’s analysis of the market had matched up international formats with gaps in the regional market.

She said that all the major pan-Arabic players were competing in the same market, with production based in Egypt. “Part of the gap is deciding where to play. Do we stay in Egypt, or go pan-Arab or produce local content?”

Entertainment Experience, a new multi-platform user-generated content project, was cited as an example of a new initiative. “This will launch in Saudi Arabia, Egypt and te Emirates,” said Abu Homos, who also claimed there is also a lack of kids content in the region.

Other Arab Format Labs projects include: one that takes Spanish prison drama Locked Up (Vis a Vis) to create a series based on real stories from Guantanamo Bay; docu-series I am a Muslim, about the views of artists, scientists and other creative people about Islam; Safari: the Empty Quarter, a search for ‘the Altantis of the Sands’ in Saudi Arabia’s Empty quarter; Let’s build!, a format promoting social responsibility and engagement where 50 volunteers make over the facilities of schools and clinics in rural areas across the region; Parenthood, a new Saudi-Gulf comedy drama following the lives of a multi-ethnic family; and The Cage, a football-related talent format developed in Saudi Arabia.

Amalia Martinez de Vlasco, SVP, entertainment brands, southern and eastern Europe, Africa and the Middle East, Viacom International Networks, said that comedy had to be local even is it has a universal quality. Comedy Central in the Middle East was launched a year ago in partnership with OSN.

“We said we wanted to foster and develop the local comedy industry. We talked to comedians and promoters and comedy clubs. There is a whole scene happening. A lot is on social media. There are a lot of talent in different countries in the region,” said Martinez de Vlasco.

She said that Comedy Central launched standup series Comedy Central Presents in February this year and that the channel is now looking at the second and third seasons of this show, working with comedians in Amman, Beirut and Cairo.

“In the coming seasons we will tape approximately 70 comedians, including some women,” she said, adding that Comedy Central also wants to give talent from the region international exposure.