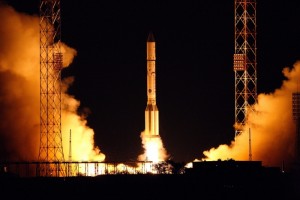 The AsiaSat 9 satellite has successfully been launched from the Baikonur Cosmodrome in Kazakhstan on board an ILS Proton launch vehicle.

AsiaSat 9 is a replacement satellite for AsiaSat 4 at 122°E with multiple C, Ku and Ka-band payloads.

The five Ku-band beams onboard the Space Systems Loral-build craft are equipped with cross-strap beam switching capability to provide flexible coverage, according to the operator.

“With Proton’s unique optimised delivery to orbit, extending the lifetime of the AsiaSat 9 satellite, AsiaSat is once again creating exceptional value for our services in Asia. AsiaSat 9 will provide additional and enhanced services to a wide region of Asia and some ground-breaking capabilities in power and efficiency in some new regions. Sincere thanks to all of the AsiaSat 9 team members for a perfect mission and launch,” said Andrew Jordan, President and Chief Executive Officer of AsiaSat.

ILS president Kirk Pysher said, “This is our fifth launch with AsiaSat over our long history with them, having launched over half of AsiaSat’s operational fleet. We are proud to have played a key role in the growth of AsiaSat’s business over the years. We appreciate the AsiaSat, ILS, Khrunichev, SSL mission teams for their dedication to ensuring a successful launch.”