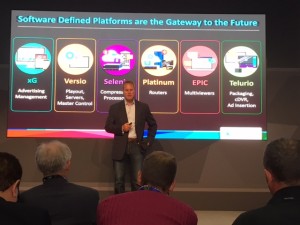 Broadcast technology vendors are facing a series significant challenges related to the move to software and the cloud and consolidation among their customer base, according to Imagine Communications CEO Charlie Vogt.

“There has not been a lot of consolidation amongst suppliers but there has [been consolidation] among our clients, and that is putting a strain on the vendors,” said Vogt, speaking at a press event at the IBC show in Amsterdam.

He said it was challenging to keep up with the scale and global requirements increasingly being placed on it. There is also a mismatch between the need to support the evolution of technologies to enable broadcasters and the willingness of companies to invest at this stage in development.

He said that many publicly quoted technology companies “have not been doing so well” recently. Most equipment suppliers are at the “bottom of a U-curve” in terms of the timing of adoption of new technologies, he said.

“None of these clients want to spend money on the old technology and…it is our job to convince customers that…the new technology is stable and real,” he said.

Vogt said that consolidation is going to become “more difficult” as the industry moves to the cloud and software. It becomes more difficult to identify potential targets for acquisition in that environment, he said.

“The only consolidation value you get in a lot of those cases is consolidating their customers. That is challenging,” he said.

Vogt said it would be “challenging for a lot of those small companies to survive”. He said there was a need for consolidating but that it was difficult to see a way forward.

Vogt said that Imagine is nevertheless seeing growth in sales for its new generation of cloud and software-based products.

“Within our portfolio our next-generation revenue is growing,” he said, although it will take a few years until those supplant fully sales of legacy technologies.

Vogt said that over the next two or three years, there will be ubiquitous hybrid IP and cloud, strong growth in microservices – the breaking up of applications into loosely coupled services to increase modularity and speed up development – advanced advertising and impression-based selling.

“I think at some point linear and OTT will strike a balance. Linear will continue to give up to OTT service,” said Vogt.

Vogt said that he and his team had spent a “lot of time” thinking about the future of the business. He said that there was “an opportunity for our investors to double down” and create “Imagine 2.0”, following Imagine’s first iteration  built on the legacy of Harris Broadcast, the company whose video technology it acquired.

Addressing rumours over a potential sale of Imagine or M&A, Vogt said that investors were putting more money into the company.

Imagine had enjoyed a consistent pipeline of orders to the tune of about US$1 billion, but the nature of the technologies in that pipeline has changed, said Vogt.

“Three years ago we weren’t making a lot of money because we were investing in R&D,” he said. That has changed and the company is now enjoying double digit EBITDA margins. He said that the company had 18 new next-generation IP cloud deployments this year. Recent wins across the portfolio include Medias du Sud and Sky.

Live UHD and IP Core sales are challenging but Imagine has recently won a big project with QVC Japan, said Vogt, beating Evertz and Grass Valley. “QVC will be the largest live content provider in the world,” he said.

On the OTT side, Imagine is at the core of CenturyLink’s network and Rogers and Charter are also key customers, he said.

Vogt said that video time on smartphones had increased 269% since 2011, while TV viewing average hours per week among 18-24s had declined from 25.3 to 15.4, citing figures from the Nielsen Media Report and PWC’s media and Entertainment Outlook report.