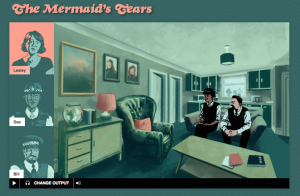 The BBC’s research and development arm has launched an interactive, object-based radio drama on BBC Taster – the corporation’s home for new ideas.

The Mermaid’s Tears lets listeners choose to follow one of three characters, and as they move around the listener hears different perspectives on the story.

BBC R&D collaborated with BBC Radio Drama London on the project, and will showcase The Mermaid’s Tears and the audio control interface it used to produce it at IBC later this week.

The drama was made in immersive 3D audio and users can listen in stereo, surround sound or with binaural audio on headphones.

The BBC has created interactive radio dramas before – such as The Wheel of Fortune and The Dark House – but this is the first time it has streamed a drama as a collection of individual audio objects with instructions for the audio receiver on how to mix them together.

The radio programme was creating using the BBC’s object-based radio studio in BBC Broadcasting House, which the corporation started building last summer and is based around BBC R&D’s IP Studio platform.

The Mermaid’s Tears is the first of two pilot programmes that BBC R&D is producing as part of the ORPHEUS project – an EU initiative that aims to create an end-to-end object-based broadcast chain for audio.

BBC R&D will show a number of other projects and work on its stand at IBC this year, including IP production, object-based audio, atomised media, speech to text and Virtual and Augmented Reality.

It will also be presenting papers in conference sessions on subjects including voice UI and High Dynamic Range, and our work will feature on several of our partner’s stands too.

BBC R&D will exhibit in the Future Zone at IBC in hall 8, stand G10