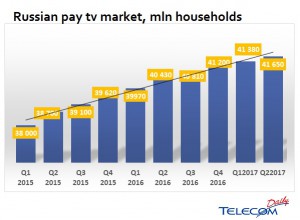 Growth in the Russian pay TV market is slowing down, with additions of 270,000 households in the second quarter taking the country’s pay TV total to 41.65 million, according to research by TelecomDaily.

According to the research, pay TV penetration in Russia reached 73% in June, delivering ARPU of RUB152 a month.

Third-placed is satellite player Orion, with three million, followed by two other IPTV players – ER-Telecom and MTS – with 2.97 million and 2.77 million subscribers respectively.

These five groups accounted for 90% of new additions in the first half of the year and collectively account for 73% of the market, according to TelecomDaily.

“The most in-demand pay TV technology in Russia is satellite TV. Besides the short-term reduction of the satellite TV growth, pay TV infrastructure in the Russian regions is still underdeveloped. IPTV’s growth is very slow because the main operators do not rush to invest in regional infrastructure projects – except Rostelecom, which concluded 50% of all new contracts in the first half of 2017,” said Kuskov.