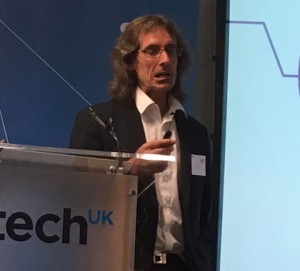 UHD TV sets are now outselling Full HD devices by a significant margin in the UK, with TV prices falling more slowly than expected, according to Nick Simon, account director, consumer electronics at GfK. However, consumer confidence is declining as the Brexit effect takes hold.

“UHD is now the dominant HD type. That is unequivocal,” said Simon, speaking at satellite operator SES’s Ultra HD Conference in London. He said that UHD-capable devices are dominant in sales of TV sets in the over-£350 price bracket, and for TV sets over 44 inches in size.

Simon said that enthusiasm for buying sets remains high in the UK despite the deteriorating value of Sterling. He said he expected the appetite for buying TV and other CE devices was usually “good enough to carry the day” in times of crisis and he expected that to be case with UHD TV.

UK consumer confidence has nevertheless dipped, and was now lower than all major western European countries other than Italy, said Simon. Expectations in the UK that prices would increase are high, thanks to the fall in the value of the pound relative to other currencies.

Simon said that the prices of TV sets overall are not declining as quickly as expected. While big TV sets are showing price declines, overall the market actually shows prices of UK TV sets increasing in 2017 relative to last year.

While the overall number of TV sets sold this year seems likely to be down on last year, Simon said that the decline in volume of sales was driven by Full HD sets, which will sell fewer sets than UHD capable devices. UHD sets now represent over two thirds of turnover value, he said.

On the downside, Simon said that there was a significant shift in viewing habits among 18-34s that could cause problems for the market in the future, with only 49% preferring the TV as a device to watch content. This compares to 88% for the over 55s. However, over 65% of total viewing time is spent viewing on TV.

Simon said that there is however little appetite generally for buying new TVs across western Europe in 2017, thanks to the lack of major sporting events.

In the UK, the value of the UHD TV sets market overtook the value of Full HD sets in 2015, while volume of sales overtook Full HD some time later, Simon noted.

While the 60-inch-plus market is dominated by UHD, 32-inch sets, in which category there is no demand for UHD sets, are still a significant segment, accounting for the majority of Full HD sales.

Simon said that the UHD share of smart TV and voice control TV sets is very high, and that he expected demand for smart TV functionality, which is strong among 47% of UK consumers, would feed into stimulating demand for UHD sets.

Physical media could also help stimulate the overall market for UHD devices. Simon said that UHD Blu-ray players are the only category of DVD of Blu-ray players that are showing positive growth.