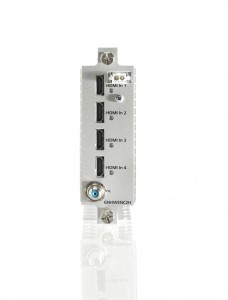 WISI is using ANGA COM to highlight a set of extensions to product lines that are designed to meet the challenges of the convergence of web and TV ANGA COM 2017, booth R11, hall 8.

The company has expanded its headend platform Chameleon with two high-density encoders, aimed at the hospitality industry.

The first new encoder has up to four HDMI inputs, while the second offers up to four HD-/SD-SDI or analog Audio/Video inputs. Both are equipped with an integrated advanced multiplexer, support MPEG-4 and MPEG-2, and are easy to combine with a Chameleon processor for further applications, such as Edge QAM, PAL and COFDM, according to WISI.

WISI says it has also optimized the efficiency and application options of its Tangram headend platform for IPTV and analogue/digital TV migration. The number of QAM channels in Annex B has been doubled for each module, from six to twelve – without additional costs. The number of IP inputs has 12 increased to up to 128 streams per module and the data processing throughput has been raised from 800Mbps to up to 1.7Gbps.

A new feature is Verimatrix bulk decryption. Video operators can deploy the Tangram chassis and cards to receive and decrypt up to 128 unique 4K, HD or SD Verimatrix scrambled video services, and then output them as any combination of IP, ASI, digital QAM or modulated analogue CATV.

WISI says it has raised the service quality of this platform by an active monitoring function of redundant inputs. The optimised user interface reduces the configuration efforts of the Tangram system for the platform operator while in operation. Moreover, Tangram now supports the new satellite TV broadcasting DVB-S2X and offers additional features, such as Traffic-Shaping and SNMP (Simple Network Management Protocol).

WISI has also introduced a new range of micro-headends – the OM 10 (DVB-S/S2 -> DVB-C/T) and OM 11 (DVB-C/T/T2 -> DVB-C/T), designed for distribution systems in hotels, hospitals and residences.

Because of their multiplex functionalities before and after the CI-modules, the micro headends are suited for the central and efficient decryption of pay TV channels, according to the company. New features include options to feed in and stream own video content via the USB interface, such as an info channel in a hotel or a hospital or the use of static service IDs at the output. Thanks to this new feature, no new TV scan is necessary if there are service changes at the input of the TV device.

At ANGA COM, WISI will for the first time show its new in-house developed multiswitch series PROSWITCH. These multiswitches are designed for professional digital satellite reception and signal distribution systems. The series offers different cascadable multiswitches with 5, 9 and 17 inputs. In addition, with the optional power supply DG 55 that powers the LNB, the multiswitch functions as a stand-alone device.

Commercially available DVB-S/S2 set-top-boxes or TVs with an integrated receiver can be used at the 8 (DY 0508, 0908, 1708) or 16 subscriber outputs (DY 0516, 0916, 1716,) and receive signals from up to four satellites. Inserted terrestrial signals, such as DVB-T/T2, DAB or FM are available at each subscriber output as well. Through the passive terrestrial path, multimedia services such as LAN over Coax or signals from a headend system can be fed in.

Each multiswitch has an integrated SAT amplifier for low insertion loss. The stand-by functionality minimises power consumption by activating the multiswitch only in case there is a switched-on STB connected. Another device of the new PROSWITCH series is the SAT amplifier DY 40 for four SAT polarisations. WISI says this is suited for building up large multiswitch systems and can be extended to several satellites by putting together more DY 40s. The gain is 30 dB in the frequency range 950-2150MHz. Via a push button, the gain can be reduced in 1 dB steps by up to 19 dB. Additionally, a slope adjustment is possible to compensate frequency depending cable loss up to 12 dB.

In addition to the above products, WISI is showcasing new CATV taps and splitters for up to 1.3GHz. These new passive components have an extended frequency range of up to 1.3 GHz, and a high intermodulation suppression, according to the company, making them suitable for future DOCSIS 3.1 applications in in-house distribution systems. Together with the new available 1.2GHz amplifiers of the VX series and the new in-house junction XU 70, WISI says it now offers a complete portfolio for future frequency expansions in cable networks.