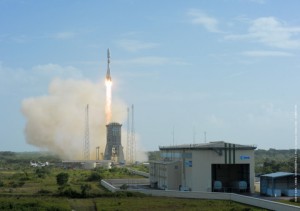 The launch, the first for SES on a Soyuz vehicle, will see the satellite manoeuvred to the 129° West position where it will serve North America, Mexico, Central America and the Caribbean as well as providing coverage for invlight connectivity through its HRS payload.

The SES-15 HTS payload will provide services to the likes of Global Eagle Entertainment, Gogo and Panasonic Avionics for inflight connectivity. In addition, the satellite has a dedicated wide beam that is designed to enable IFC/IFE providers to deliver live TV content on all flight routes across the US, including Hawaii and Alaska, as well as Canada, the Caribbean and Mexico.

The satellite will also provide VSAT and GPS connectivity.

“The successful launch of SES-15 is the first of our three planned hybrid satellites, which have both wide beams and high throughput capability. SES-15, along with the soon-to-be launched SES-14 hybrid satellite, and our existing in-orbit satellites, offer the most resilient aeronautical connectivity platform in North America,” said Martin Halliwell, chief technology officer at SES.

“SES-15 will allow us to strengthen our ability to provide next generation services in data-intensive markets such as maritime and corporate broadband.”