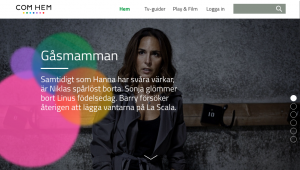 Swedish operator Com Hem is moving towards an app-focused future where Com Hem Play, rather than its set-top box, will be the focus of it TV offering, according to CEO Anders Nillson.

Speaking at Cable Congress in Brussels this morning, Nillson said that Com Hem’s forward-looking approach to TV will centre on providing access to Com Hem Play – which offers linear channels and on-demand content – on whatever device is most suitable to the consumer.

“In a couple of years time we’ll probably sell the service without the box – that’s where I think we’re headed,” said Nillson.

“It’s up to the consumer to decide how to consume it. Some will want to have a box, and we will provide that, some won’t.”

In the meantime, he said that Com Hem is developing a new set-top box that will work across DOCSIS cable, digital and IPTV delivery methods, following its SEK 1.33 billion (€144 million) acquisition of rival Swedish pay TV operator Boxer last year.

Com Hem previously announced that it plans to build out fibre to most of the 500,000 customers of digital-terrestrial pay TV service Boxer and Nillson said that the new box would present a “lovely opportunity” to convert Boxer customers to IPTV if they so choose.

To find out more about Com Hem’s strategy, check out our interview chief technology officer Thomas Helbo, which will appear on DTVE tomorrow.