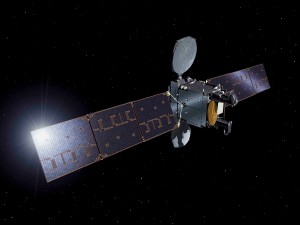 Spanish satellite operator Hispasat has successfully launched its Hispasat 36W-1 satellite on board a Soyuz rocket from French Guiana.

Hispasat 36W-1, the operator’s 10th satellite, will provide coverage for South America and Europe, including the Canary Islands. It has a 15-year lifespan and will offer video contribution and cellular backhaul services, as well as enterprise and broadband solutions. The satellite is fitted with 20 Ku-band transponders and up to three Ka-band transponders.

Hispasat has been keen to highlight the technically innovative nature of the satellite. Hispasat 36W-1, developed in collaboration with the European Space Agency, is the first satellite built on the ‘SmallGEO’ platform developed by ESA and the German manufacturer OHB System.

The design of this platform allows for a substantial reduction in the mass of the satellite thanks to the use of electric propulsion throughout its entire useful life, thereby reducing launching costs.

Hispasat 36W-1 also features the RedSAT ‘regenerative payload’, made up of a processor and an antenna that actively receives reconfigurable beams.

“This new satellite is an important step in Hispasat’s innovation strategy. Hispasat 36W-1 is not only the first mission of the new SmallGEO platform, but also incorporates an advanced regenerative payload that will provide the satellite with greater flexibility and signal quality thanks to its reconfigurable antenna and on-board processor, thus improving the telecommunications services it will provide to its clients. We are very satisfied with our collaboration with the European Space Agency (ESA), which has allowed us to participate in a leading technological project to which they have added significant value with their knowledge and experience in the space sector,” said Carlos Espinós, Hispasat’s CEO.