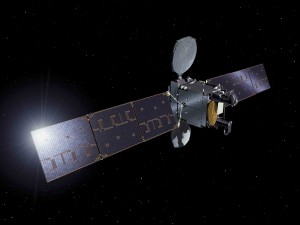 Spanish satellite operator Hispasat has unveiled its latest geostationary craft, Hispasat 36W-1, which has been developed in collaboration with the European Space Agency and will be launched into orbit this month.

The satellite, which will be launched via a Soyuz vehicle from the European Spaceport in French Guiana on January 27, includes 20 Ku-band transponders and has capacity for up to three additional Ka-band transponders over the Iberian peninsula and the Canary Islands.

The craft will be positioned at the 36° West orbital slot, providing coverage over South Amercia, Europe and the Canary Islands.

According to Hispasat, it is the first satellite built on the ‘SmallGEO’ platform developed by ESA and the German manufacturer OHB System.

The design of this platform allows for a substantial reduction in the mass of the satellite thanks to the use of electric propulsion throughout its entire useful life, thereby reducing launching costs.

Hispasat 36W-1 also features the RedSAT ‘regenerative payload’, made up of a processor and an antenna that actively receives reconfigurable beams.

The on-board processor regenerates the signal received to transmit it cleanly and noise-free to Earth, according to the operator, while the Direct Radiating Array-Electronically Steerable Antenna (DRA-ELSA) used on the satellite allows the beams received to be reoriented, the position of which can be electronically controlled from Earth and changed, so that the satellite can be adapted to the changing needs of clients throughout its life, according to Hispasat.

“With the development of this new satellite, Hispasat is now at the forefront of initiatives for the use of payloads in innovative communications, through which it will be possible to offer the latest in communications services. We will provide support to our clients in the area of direct-to-home television platforms and in High and Ultra High Definition, and we will also provide more efficient broadband services thanks to the Ka-band capacity incorporated in the satellite,” said Elena Pisonero, president of Hispasat.

Juan Carlos Cortés, head of Spain’s Centre for the Development of Industrial Technology, said: “The CDTI highly values the important milestone reached through the launch of this satellite and the broad participation of the Spanish industry, led by the driving force of the operator Hispasat. The government has made a strong investment in this project through the European Space Agency in support of the participating companies, which we hope will lead to a higher position for these companies in the value chain, an expansion of their product portfolio and an increase in their export.”