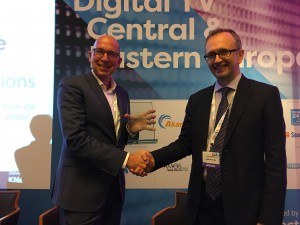 Bill Wijdeveld, VP of business development at M7 Group, was named as Digital TV CEE Industry Leader of the Year at the Digital TV CEE Awards, which were presented at this week’s conference in Budapest. Wijdeveld was recognised for his role in developing the company’s hybrid TV offering.

Chris Bakx, VP Consumer Central and Eastern Europe, Liberty Global, was named Marketer of the Year for his work in developing the commercialization of the Horizon advanced TV platform and the WiFi Connect Box across the region, and the Replay TV service in Hungary.