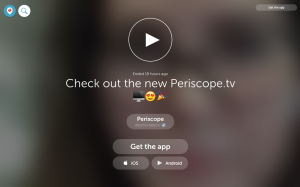 Channels will be categorised according to the conversation that surrounds them and will range from breaking or developing events to enduring topics.

Periscope said that featured channels such as the Presidential Debates, New York Fashion Week and the UN General Assembly “merit a dedicated resource to surface timely and relevant live video to that event or topic”.

It will also continue to highlight breaking news events, such as the Charlotte Protests or the attempted political coup in Turkey in standalone, featured channels.

“These channels will curate relevant, timely broadcasts from our community to help tell that story as it unfolds,” said Periscope in a blog announcing the changes.

At the same time, channels driven by hashtags, such as #Food, #Comedy, #Art and#Music will be updated in real-time as someone in the Periscope starts a live broadcast.

“We realise that channels may not always represent the full spectrum of live content on a specific topic, but we hope that you’ll find diverse perspectives by exploring the content in each channel,” said Periscope.

The news comes after Periscope appointed Medium executive Evan Hansen as editor in chief back in May.