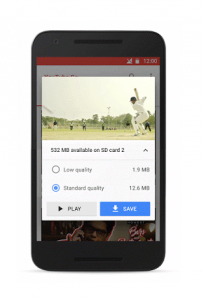 YouTube is due to rollout a new “offline first” mobile app for the Indian market.

YouTube Go is due to roll out in the next few months and was reimagined “from the ground up” in a bid to bring YouTube to “the next generation of viewers”.

YouTube said the app uses recommendations, is designed to work when there is low or no connectivity, and is transparent so it helps to reduce data use.

“Finally, it’s a social experience, connecting you with the people and content you care about,” said Johanna Wright, vice-president of product management, YouTube.

“We’ll gradually roll out YouTube Go to more and more people over the next few months, getting their feedback and improving the product before launching it widely early next year.”

The move comes after Google first launched a YouTube offline feature for viewers in India, Indonesia and the Philippines in December 2014.

This allowed viewers to take videos offline so they could be played back during periods of low or no internet connectivity for up to 48 hours.