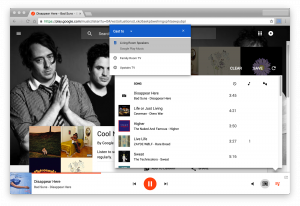 Google Cast is now fully built into Chrome, allowing anyone to Cast content to their TV “without having to install or configure anything”, according to the company.

Announcing the move on its Chrome blog, Google said that when users visit websites that are integrated with Cast, the Cast icon will now appear allowing them to sync up to their Chromecast in “a couple of clicks”

“You can also view websites that are not integrated with Cast on your TV by selecting the “Cast” menu item from the Chrome menu,” said Chrome product manager Stephen Konig.

Since then Google claims that Casting from Chrome has proved “incredibly popular” with people casting more than 38 million times from Chrome and watching and listening to more than 50 million hours of content in the past month alone.

“With Google Cast and Chrome, you can share what you love to watch with those around you. We’re excited to make this available to everyone. To get the new built-in Cast functionality all you need to do is make sure you have the latest version of Chrome,” said Konig.