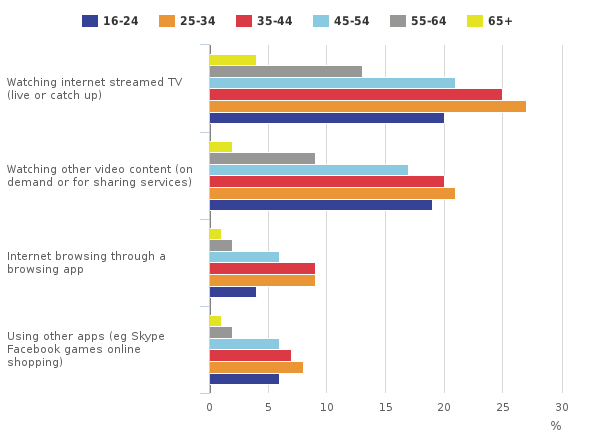 Activities carried out on a smart TV by age group, 2016 (Source: ONS)

Some 18% of adults in the UK watched internet streamed TV via a smart TV this year, according to the Office for National Statistics (ONS).

More than a quarter – 27% – of those aged 25 to 34 had watched internet streamed TV on a smart TV, according to the latest ONS Statistical Bulletin.

Using a smart TV for internet browsing via a browser app and using other apps were both carried out by 5% of adults. Overall, 21% of adults used a smart TV to connect to the internet for some purpose this year.

Watching other video content on smart TVs showed a similar spread, but attracted a lower proportion of users, with 21% of 25-34s and 19% of 16-24s viewing other on-demand content and sharing services on smart TVs.

Fifty-nine per cent of  UK 16-24 year-olds have watched internet-streamed TV from TV broadcasters overall on all devices this year, according to the ONS. Figures ranged from 60% of 25-34 year-olds to 18% of over 65s.

Mobiles or smartphones are used to access the internet by 71% of people, compared with 40% using desktops. Laptops are used by 62% and tablets by 52%.

The most popular online activities were sending and receiving emails, and finding information about goods and services.

The statistics were gathered from the ONS’s Opinions and Lifestyle Survey in January, February and April this year.