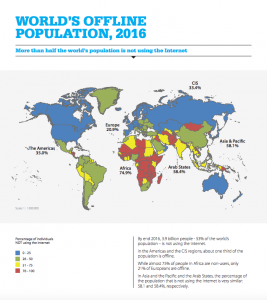 More than half of the world’s population is still not using the internet, according to stats issued by ITU.

The research claims that 3.9 billion people remain cut-off from the resources of the internet, despite falling prices for information and communications technology.

“Global interconnectedness is rapidly expanding, however more needs to be done to bridge the digital divide and bring the more than half of the global population not using the Internet into the digital economy,” said ITU secretary-general, Houlin Zhao.

ITU is the United Nations-specialised agency for information and communication technologies. The organisation’s duties include allocating global radio spectrum and satellite orbits and developing the technical standards that ensure networks and technologies interconnect.