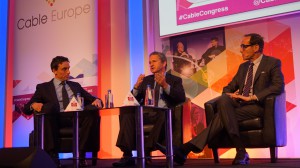 Cable operators that invest in advanced TV offerings can match the TV experience provided by Netflix and other OTT players, forcing those companies to invest in content creation to differentiate their offerings, according to Mike Fries, president and CEO of Liberty Global, interviewed on stage alongside AMC president and CEO Josh Sapan at Cable Congress this morning.

Fries said that OTT services such as Netflix were in any case “top up” products rather than substitutes for cable video. He said that Netflix could be integrated into Liberty Global offerings outside the UK, where it is present on Virgin Media’s platform, soon. He pointed out that ProSiebenSat.1-backed on-demand service Maxdome is already available on Liberty’s cable service in Germany.

Fries said that OTT services could only be relevant if they invested in content, because the functionality of companies like Liberty Global now provided the same experience as that of Netflix. OTT companies no longer provide a unique viewing experience and convenience, he said.

Fries said that cable was “providing viewers with great, smart intuitive ways to watch video. Maybe we didn’t invent it but we followed it quickly.”

He said that cable operators “should be indifferent as to what screen you watch your television on” and differentiate their offerings by providing their content on all screens.

Fries said that cable had “not just survived but thrived”. Even in the US, operators are growing their video base by 5% a year, he said. “We have spent a lot of time thinking about how to make that television experience better,” he said, adding that cable also has the advantage that it does not rely exclusively on video. “Today only about 35% of our business comes from video,” he said.