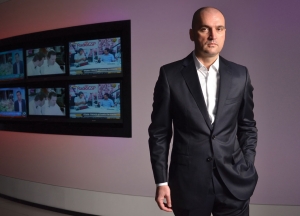 Two of the most powerful figures in Romanian media have been sentenced after guilty verdicts were delivered in a blackmail case involving the pair and a local cable operator.

The charges included extortion and and conspiracy to blackmail. A RON350,000 (€78,000) fine was levied on the Antena Group. The former tax authority (ANAF) boss, Serban Pop, was sentenced to two years, on associated charges.

Dan Matiescu, the former director of Intact Publishing, was acquitted. Charges relating to the Antena 3 news channel also resulted in an acquittal.

Voiculescu is businessman, politician and founder of Intact. He will serve his time concurrently with a 10-year sentence handed down in 2014 in a case related to the privatisation of Romania’s Food Research Institute.

Antena TV is Intact’s broadcast operation and with Alexandrescu at the helm, operates a raft of channels including the Antena services as well as the Euforia, Zu TV and recently launched Happy TV channels. Antena 1 is its flagship channel, claiming a year-on-year increase of 18% in primetime viewing share through April.

Antena told TBI it planned to appeal the verdicts in ten days, the soonest local law allows, and while the legal situation plays out it will continue operating as usual.

“Intact Media Group will appeal against the Court’s decision of today, May 12 2016, with regards to the case involving the group’s representatives and the main local cable company,” said Intact.

“With a history of 25 years on the Romanian media market, Intact Media Group is fully capable to manage all its ongoing projects as well as to develop new undertakings,” it added. “The group thanks its public and its partners for their support and loyalty.”

The court case dates back several years, and centres on dealing between Antena and Intact and cable company RCS&RDS.

Alexandrescu was arrested in 2013, accused of blackmailing an RCS&RDS executive amid a politically-charged dispute concerning carriage of Antena channels in 2012, an election year in Romania.

The charges were brought following an investigation by Romania’s National Anticorruption Directorate.

As the case was unfolding Alexandrescu, speaking to DTVE sister title TBI, was critical of local regulators and competition authorities.

“I would say, quite strongly, that the difficulties we see in this market are due to the weakness of the authorities,” he said. “We have a Competition Council Authority which is, I would say, quite favourable [in its decisions] when it comes to all the problems that are created by one big Romanian operator – the biggest one.”