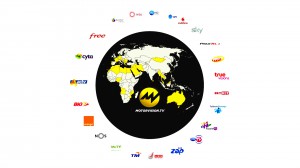 Germany’s Motorvision TV is extending its reach in Europe, the Middle East and Africa by launching on six additional platforms.

The automotive-themed network has partnered with Dubai-based pay TV provider My-HD, making the channel available on My-HD’s My Maghreb and My Arab packages in countries including the United Arab Emirates, Egypt, Iraq, Iran, Jordan, Kuwait, Morocco and Saudi Arabia.

In Greece Motorvision has signed a new deal with Vodafone Home’s TV service and renewed its distribution agreement with OTE TV, which has broadcast the channel since 2013.

In Cyprus the channel is already being broadcast on Primetel and Cablenet Communication in English with Greek subtitles, but is now also available as part of the Sport Plus package on CyTA’s pay TV platform.

In Romania Motorvision can now be received by UPC subscribers in addition to the existing distribution on Orange TV, while in Croatia the channel has reached a distribution agreement with ZABAVA I TO.

Motorvision has also expanded its coverage in Africa with its inclusion in Nigeria based Suburban Fibre Company’s triple play service, Legend.

“All of these new and extended agreements show that there is a high demand for our linear Motorvision TV channel – not only from new market entrants but also from established local- market platform players and large operators,” said Raimund Koehler, CEO of the Motorvision Group.

In addition, we have also seen an increase in our audience over the past months in those markets where we have access to TV ratings, so I am absolutely pleased with the positive development.”