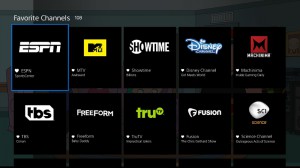 Sony Network Entertainment International (SNEI) has expanded its PlayStation Vue cloud TV service across the US, offering live and on-demand content from channels like AMC, Disney and ESPN.

The over-the-top delivered TV service will now be available in an additional 203 TV-designated market areas, with the US-wide rollout coming a year after SNEI first introduced the service to a select collection of US cities.

Viewers are able to choose from three content packages that range in price from US$29.99 per-month to US$44.99 per-month, with no long-term contracts.

“Since launching a year ago, our priority with PlayStation Vue has been to secure the best TV content for our audience and make it available to consumers nationwide; today, we’re delivering on that promise,” said Eric Lempel, senior vice president of marketing and head of PlayStation Network Americas, SNEI.

“PlayStation Vue has been an ambitious project from the start, and national expansion demonstrates our ability to innovate in an industry that’s overdue for a reinvented experience. Thanks to the strong network relationships we’ve forged and technology we’ve built, consumers nationwide can enjoy a better way to watch TV.”