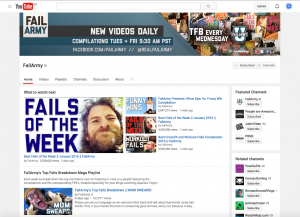 Multichannel network Jukin Media says it has now paid content creators a total of US$5 million in licensing fees since launching in 2009.

Jukin does not create its own online video, but licenses hundreds of video each week. It operates YouTube brands FailArmy, JukinVideo and People Are Awesome, which was last week at the centre of a copyright row with content creator Devin Graham.

“From the beginning we’ve believed strongly in the idea that user-generated videos have tremendous intrinsic value,” the company wrote in a blog post announcing the milestone figure. “We began with a plan to find great videos, fairly compensate their owners, and maximise the potential of those clips.”

The firm says it has amassed a library of 20,000 legally-licensed videos since first identifying that commercial viral video was regularly being stolen and redistributed online.

“In response, we worked hard to educate the marketplace to ensure that video owners would be paid for the use of their videos. Now, several years later, Jukin has hit this incredible milestone of paying more than US$5 million to UGC video creators,” the firm wrote.