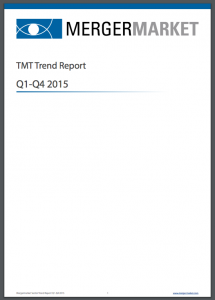 The value of media company mergers and acquisitions in 2015 hit an eight-year high of US$87.4 billion, according to a new report.

The figure was spread across 600 deals, and came as global telecommunications, media and technology M&A hit an all-time high of US$768.3 billon across3,021 last year, Mergermarket’s MTM Trend Report Q1-Q4 2015 showed.

Overall, the US was the most active region globally, with 977 deals comprising US$412.5 billion, or 54% of all business. Asia Pacific (excl. Japan) saw its highestdeal value and count, with 783 deals bringing in US$177.7 billion, a 149% increase year-on-year.

Domestic transactions led the M&A activity in both the US and Asia Pacific, withdeals in China cited as a key driver in the latter region.

The trend for M&A is expected to continue, Mergermarket predicted. “The golden age of TMT M&A looks set to continue into 2016, driven in particular by US activity as companies seek to expand their

presence in new markets,” the firm aid in its report.

“The sector will continue to draw attention from a diverse range of investors seeking to innovate in the face of transforming consumer demands.”

Mergermarket’s report was based on all deals worth more than US$5 million, and based on the firm’s M&A database. Deals with undisclosed values were included where the target company’s turnover exceeded US$10 million.