TVN to invest in online originals for TVN Player

The originals will start with a Polish version of US series Web Therapy, with a budget of around PLN1 million for 10 episodes.

TVN has also already commissioned a Polish verision of Lip Sync Battle and will be the exclusive Polish distributor for Cape Town, a crime drama series it has developed as a coproduction. TVN is acting as the distributor and main partner for Poland for this series, which will be shown exclusively on TVN Player.

At a press event at MIPCOM in Cannes, Christian Anting, TVN management board member in charge of digital and e-commerce, said that the online originals had attracted top acting talent from Poland, who had agreed to join shows for online distribution only, demonstrating the strength of TVN’s proposition. The online originals will remain exclusive to the Player for at least 12 months, he said.

TVN is also allocating PLN1 million for the development of creative ideas for further online originals.

Anting said that over time TVN Player was attracting more viewers than the average TV audience for a single episode of, for example, Poland’s Top Model. He said that Polish content drives higher audiences than US movies or series, meaning that it also makes sense to invest in originals.

“TVN creative output is what allows to build the platform on a solid basis,” he said.

Separately, TVN and Samsung Electronics have teamed up to develop dedicated VoD offerings for mobile devices and smart TVs in Poland. Users of Samsung devices will get access to a dedicated content offering of TVN’s OTT platform.

Anting said that TVN had built the number one long form video platform in Poland in the shape of TVN Player. This service had 1.3 million customers, which represents a doubling over the last 12 months, said Anting. Viewers spent av average of eight hours per month viewing the content on the platform, and the service has 2.5 million fans on Facebook, he said.

“We use engagement and the passion that viewers have,” said Anting.

Anting said that “Poland is a connected country today”, with 70% of homes now having broadband and 20% having smart TVs. He said that viewers were engaging with the platform on second screen devices. About 78% of online users engaged in multiscreen behaviour, he said. 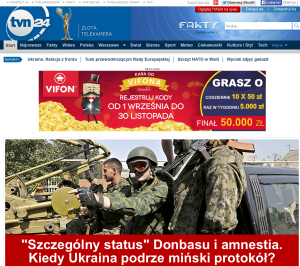 Anting said that one in four TVN Player users watched TVN series online only, meaning that the broadcaster was adding new viewers to its service rather than cannibalising its pay TV service.

He said that the Player was not simply replicating what was on linear TV. The broadcaster has made previous available seven days in advance, has developed spin-offfs of successful formats for online.

Speaking about Scripps’ acquisition of TVN at the same event, TVN CEO Markus Tellenbach said that Scripps and TVN were complementary. “We have complementary competences and we are both innovative companies,” he said.

Tellenbach said TV companies faced the challenge of how to migrate to non-linear content consumption. He said only the BBC had managed this transition well. Tellenbach said that Scripps’ decision to take TVN private gave it the opportunity to invest and develop without having to address the requirements of quarterly reporting.

“We think TVN’s content has the strength to drive a non-linear platform,” said Tellenbach in relation to the company’s plans to develop TVN Player. TVN ultimately plans to develop a subscription service online, he said, although advertising-supported VoD would remain dominant for now.

TVN and Scripps have unveiled their first programming collaboration around Scripps’ show Kitchen Crashers, which will be developed for TVN’s linear channels. “There are many more to follow,” said Tellenbach, adding that Scripps’ expertise could help lead TVN into the lifestyle genre.