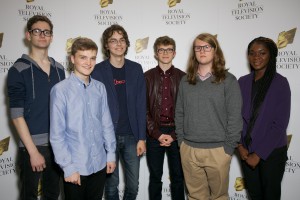 The UK’s Royal Television Society (RTS) has  announced the 25 recipients of its 2015 undergraduate bursaries.

The RTS has this year invested £75,000 (€67,000) in two schemes – offering 20 bursaries for TV production and broadcast journalism students and, for the first time, five bursaries for computing and engineering undergraduates. The bursaries aim to widen participation in media and related industries and support talented students from lower income backgrounds seeking to pursue a career in television. During their studies, each recipient will be given £1,000 per year to assist with their expenses, according to the RTS.

The recipients were selected by a panel of industry professionals following an open call to UK students applying for courses at accredited Universities.

Theresa Wise, RTS CEO said: “The RTS is proud to be providing crucial support to talented individuals seeking to work in television and its related fields. We are committed to increasing diversity in the industry and safeguarding its future by giving a helping hand to the next generation of rising stars, some of whom might not have otherwise considered a career in TV. The response we’ve had to our two schemes has been fantastic but following an exacting selection process I’m excited to say we have 25 beneficiaries – all of whom stood-out and demonstrated real ambition and commitment to learning. We wish them all the best for the next three years and look forward to following their progress.”

Graeme Thompson, chair of the RTS education committee and Dean of Arts, Design and Media at Sunderland University, said: “We were so impressed this year with the calibre of RTS Undergraduate Bursary applicants. It’s hugely exciting to see such a high number of talented individuals seeking to work in the TV industry. The bursary definitely makes it easier for them to contemplate university education, but the mentoring and support they’ll receive from the RTS throughout their studies is priceless.”

Simon Pitts, chair of the RTS technology bursaries and managing director, online, pay TV, interactive and technology, ITV, said: “It’s vital we attract more engineers and computer scientists to the TV industry so our aim with these bursaries was to encourage students with these interests to consider a career in television. We were extremely pleased with the response and I’m delighted to say we have selected five outstanding individuals who have demonstrated a real interest in and commitment to succeed in the industry.”