IBC 2015 on course for record attendance 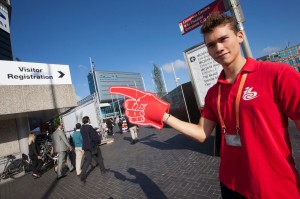 This year’s IBC – the broadcast industry’s biggest European trade show – had recorded 54,179 visitors by 10:00 this morning. The event’s CEO, Mike Crimp, said he was confident about “achieving record performance” with the expected arrival of a few hundred additional visitors today.

As at 10:40 this morning, 21,700 square feet of exhibition space had been rebooked. Next year will see the addition of a new Hall 9 at the Amsterdam Rai and the renumbering of some existing halls that will add 1,500 square metres net to the event.

Crimp announced new dates from 2016 for the spin-off Content Everywhere-branded event launched in Dubai in January, featuring a free conference. “We got all of the top CEOs and CTOs and they have asked us to do another conference in November,” he said. The Dubai event will also be held in November from now on, he said. “It’s a very competitive market but the economy is growing fast with huge growth in IP video and a thirst of knowledge. [Content Everywhere] It also allows us to develop a brand that is not quite so broadcast-centric…and have a different type of debate that is very relevant to that region.”

Crimp said that the IBC’s Touch and Connect app for networking had been successful. People had used it mostly to meet other visitors, he said. “The value of the show is changing from a transaction-based show. People are building big IP-based systems and they are interested in meeting people who can help them solve those problems and put big systems together,” he said.

This year’s IBC conference encompassed over 80 sessions and 250 speakers from around the world. Phil White, director of technology and events, said that the success of the IBC big screen experience had been reflected in the fact that Disney Pixar had remastered Inside Out with extended colour gamut just for the show.