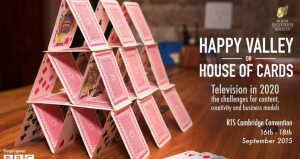 The Royal Television Society (RTS) has unveiled the line-up for its 2015 convention, with the title Happy Valley or House of Cards: Television 2020 – the Challenges for Content, Creativity and Business Models.

The event, which runs from September 16-18, will be sponsored by the BBC and chaired by BBC director-general Tony Hall.

The event will also feature comments form the ast of Channel 4 reality series Gogglebox, which features members of the public sitting at home watching and commenting on TV shows.

Philippe Dauman, President and CEO of Viacom, will present a keynote.