Microsoft to launch Xbox One DVR next year 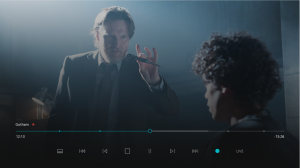 Microsoft is due to launch an over-the-air TV DVR that will plug into its Xbox One games console next year.

Announcing the plans at computer and video game event Gamescom in Cologne yesterday, Microsoft said that DVR functionality is “one of the most requested live TV features” and that it will be available in select countries where users can watch live TV on the console.

Microsoft said the DVR will let users record live linear TV, schedule recordings from the Xbox OneGuide and stream recorded TV shows to other devices – either via the Xbox app on Windows 10, or through Xbox SmartGlass for iOS and Android.

Users can also download shows to Windows 10 phones, PCs or tablets so that they can watch them when offline.

Microsoft said that setting up the DVR would be “as easy as plugging a USB hard drive into your Xbox One console and recording your content” and that the amount of TV you can record and save will be dependent on the size of the drive.

“With DVR for over-the-air TV, you’ll never miss a minute of your favourite TV shows, movies or sporting events when you want to play a game or need to step out,” said Microsoft.

“We’re looking forward to bringing you this feature as a subscription-free service in 2016. Stay tuned for more.”