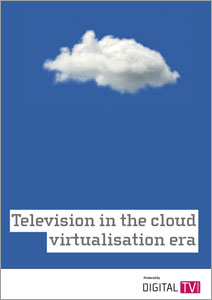 TV operators want to use cloud TV technology to improve the user experience to match that increasingly offered by OTT providers, and to make their own operations work more efficiently, but are more less enthusiastic about opening up their pay TV platforms to the wider world of web video, according to Digital TV Europe’s report, Television in the Cloud Virtualisation Era.

The report, which surveyed over 150 industry players on a range of issues related to cloud TV, found that operators want to deliver greater personalisation and to integrate TV, multiscreen usage and OTT video in a single unified guide. They see the threat presented by OTT providers as being primarily about their ability to offer a superior user experience and they want the tools to combat this and deliver something that has an equal or greater appeal to consumers.

Three in four respondents said that multiscreen access to TV services is more effectively delivered via the cloud, against 16% in favour of the set-top box. A similarly high proportion – seven in 10 – favour the cloud for the delivery of OTT services such as YouTube or Netflix to the TV screen, against 19% who favour the set-top box.

Over two thirds of respondents also prefer the cloud when it comes to delivering transactional video-on-demand services, against under one in four who favour the set-top box only. Over three in five say the cloud can more effectively deliver the interactive programming guide, with one in four favouring the set-top box.

Asked to rate a set of factors for relevance to the success of the pay TV business now and in the future on a scale of one to five, survey respondents highlighted, above all, the need for pay TV operators to match the experience users are increasingly accustomed to on the web.

Over three in five respondents gave the ability to personalise in the same way as web services the maximum possible rating for importance, with a further 24% giving it the second highest possible rating.

The report found that while cloud TV is important, it’s not going to replace the set-top box anytime soon. Forty-two per cent of respondents endorsed the view that, while a growing proportion of services will be cloud-delivered, operators will continue to invest in advanced set-top box platforms and will continue to deploy set-tops for the foreseeable future.

Operators not only see a consistent, advanced multiscreen user guide as a key app that could be enabled by cloud TV but are looking to migrate DVR services to the cloud rapidly if the technology is available and the rules allow it.