Analogue-to-digital TV deadline reached with much work to do 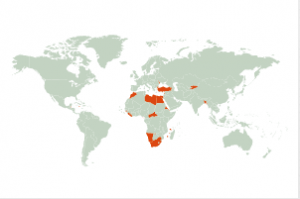 ITU map of countries that have not yet started digital switchover

The official deadline for for switchover from analogue to digital TV in Europe, Africa, the Middle East and Central Asia has been reached today, with a number of countries yet to complete or even start the process.

A June 17, 2015, deadline for switching off analogue television broadcasting in the UHF band was set by member states of the ITU (International Telecommunication Union) at the Regional Radiocommunication Conference in 2006 – a decision known as the GE06 Regional Agreement.

However, according to updated ITU information on the status of the transition to digital terrestrial television (DTT), work is still ongoing in a number of countries in Eastern Europe and Africa, and has not yet started in some African countries.

Among the countries the ITU says are yet to begin digital switchover are the Central African Republic, Egypt, Eritrea, Guinea-Bissau, Liberia, Libya, Morocco, Namibia, Sierra Leone and South Africa.

In a statement today, ITU secretary-general, Houlin Zhao, said: “17 June, marks a historic landmark in the transition from analogue to digital television broadcasting. The process, which began in June 2006, has re-envisioned the way the world watches and interacts with TV and opened the way for new innovations and developments in the broadcast industry.”

The ITU is holding an event called the International Symposium on the Digital Switchover in Geneva, Switzerland today.

This event will provide background information on the GE06 Agreement, give an update on the status of analogue to digital switchover worldwide, and give information on the potential future use of digital TV by the broadcasters in all three ITU Regions. This will take into account new television systems such as HDTV and UHDTV.