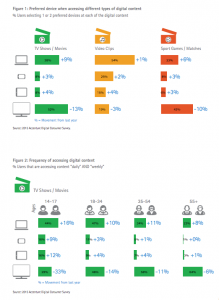 Video consumption across different devices, anytime, is accelerating the decline of traditional TV viewing, according to a new global research report by Accenture.

The ‘Digital Video and the Connected Consumer’ study claims there to be “double-digit declines in TV viewing globally” among viewers of “nearly all ages”.

“TV shows and movies are now a viewing staple on mobile devices of all shapes and sizes, thanks to improved streaming and longer battery life. The second screen viewing experience is where the content creators, broadcasters and programmers will succeed or fail.”

Among 14 to 17 year-olds, there was a 33% year-on-year decline in accessing TV shows and movies from TV screens on a daily and weekly basis. However, the same age group accessing the same type of content on laptops was up 16%, on tablets up 12% and on smartphones up 9%, according to Accenture.

Similar trends emerged among those aged 18-34, with a 14% year-on-year decline in watching TV shows and movies on the TV and gains across other devices.

People aged 35-54 watched 11% less TV and those aged 55 and over also watched a reported 6% less on the main screen in the house.

“We found that the TV is the only category of device experiencing uniform, double-digit usage declines, across different types of media worldwide, among viewers of nearly all ages. In other words, it’s not just ‘screenagers’ who are turning their backs on the TV although 14-17 year-olds are abandoning TV screens faster than any other group. Profound changes are taking place in how all of us consume video content – and they’re happening right in front our eyes,” said Accenture.

The report also found that people watching TV do so in combination with at least one other device, with 87% of consumers reported to also use their smartphone, tablet, games console, e-book or laptop whilst watching TV.

“In other words, the second screen is firmly established as a key element of the value proposition for all media companies,” said Accenture.