Samsung calls for more collaboration on Internet of Things 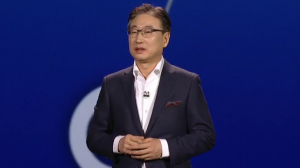 Samsung Electronics president and CEO BK Yoon has called for more openness and collaboration across industries to unlock the potential of the ‘Internet of Things’.

Delivering the opening keynote at this year’s Consumer Electronics Show in Las Vegas, Yoon said that the Internet of Things has “the potential to transform our society, economy and how we live our lives” but warned that different industry sectors must pull together to realise this promise.

Outlining Samsung’s commitment to the Internet of Things (IoT), Yoon said that by 2017 all Samsung televisions will be IoT devices and that in five years all Samsung hardware will be IoT-ready.

He also highlighted the importance of developers in the development of the Internet of Things and announced that Samsung will invest more than US$100 million (€84 million) in its developer community in 2015.

At CES, Samsung also showcased its next generation of devices and services, led by an 88-inch SUHD TV, setting its focus on “smarter living.”

Samsung also said that from 2015 all of its smart TVs will be powered by the Tizen operating system, which it said offers better connectivity and gives developers a “more robust and easier platform for which to create new applications.”

“Most importantly, it ensures that consumers will have access to a much broader range of Smart TV content and services than ever before,” said Samsung.