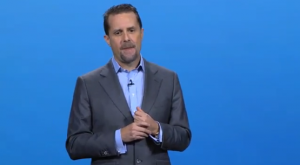 Sony is planning to launch a new cloud-based TV service in the US later this year, combining live TV with video-on-demand in a bid to “redefine” traditional television.

Announcing the plans at CES in Las Vegas, Sony Computer Entertainment’s president and group CEO, Andrew House, said that the web-powered service would be available across different connected devices.

“No other company in the world is better poised to lead the TV revolution than Sony. There are more than 70 million internet-enabled Sony devices in US living rooms today, including 25 million PlayStation 3 systems. And millions of people already rely on Sony for their video needs,” said House.

He claimed that Sony’s vision was to “transform the user experience so finding and discovering live TV and video on demand shows is intuitive and immediate.”

“We will make TV a more personalised and dynamic experience that caters to your preferences and adapts to your viewing habits,” said House.

The cloud TV service will let viewers access movies, TV shows, and sports through a single destination, Sony said. Its “dynamic interface” will also adapt to a viewer’s tastes, offering a personalised menu and channels.

It is also designed to let viewers resume viewing from different devices – for example someone could start watching from a PlayStation 4 console in the living room and resume on an iPad in another room.

House described the cloud service as a “natural evolution of Sony’s offerings,” and said it would start testing in the US later this year.

Reports that Sony was talking to content providers about licensing channels for a new TV service emerged last summer.

However, since then, Intel has seemingly abandoned plans to launch a similar service, reportedly seeking a buyer for its yet-to-launch set-top powered OnCue internet TV venture.

Sony’s CES announcement came as the firm revealed that it had sold 4.2 million units of its recently released PS4 console, as of December 28.