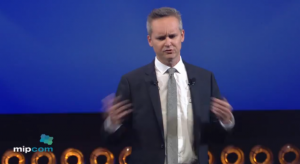 Amazon is looking to up the volume of original productions it takes to pilot by developing on its recently launched Amazon Storyteller tool, according to Amazon Studios director Roy Price.

Delivering a keynote presentation at MIPCOM in Cannes yesterday, Price said that by evolving Storyteller – a tool that is designed to easily turn a script into a visual storyboard – it could potentially boost its pilot output by a factor of 1,000.

He said that while turning submitted scripts into pilots “allow us to keep our decisions in touch with customer views,” today “perhaps one weakness of our current system is filtering.”

“We got 5,000 TV pilot scripts, but produced 14 pilots in pilot season 1.0. Now we’re producing 11 more. That’s a lot of filtering that doesn’t have a ton of customer input. So hopefully in the future, we can have a much higher percentage of incoming scripts get some kind of visual treatment,” said Price.

Referring to Amazon Storyteller, which is still in beta, he added: “Basically the idea is that you can put your script in and today it helps you create a storyboard. This is in the early stages, but you might imagine that we can keep making this better and more powerful.”

Amazon announced its first five original series in May, which were selected from the initial 14 pilots it made. These include political comedy Alpha House, which will star John Goodman; Betas, about four roommates trying to get a social media start-up off the ground; and kids series Annebots, Creative Galaxy and Tumbleaf.