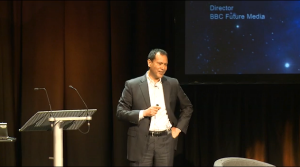 Delivering a keynote at the BBC’s Online briefing last week, Rivera outlined the BBC’s future-looking online strategy and said that last year’s coverage of the Olympics were not the “zenith” of the BBC’s online ambitions, but a “new baseline” to build from – part of the “new normal” of what the BBC does.

“Our plans for Glastonbury [music festival] is to give it ‘the Olympic treatment’ so everyone can see everything across every device,” Rivera said, claiming that cross-device, multi-stream event coverage would extend from purely sports events.

In terms of apps he said that the BBC would build on deployments for shows like The Voice UK and the Antiques Roadshow. “We’ll have more of these, that aren’t just second screen experiences – they’re synchronised experiences and they become personalised experiences as well,” said Rivera.

Commenting on the BBC’s Connected Red Button service, which the corporation launched with Virgin Media last year to deliver extra content on TV via the web, Rivera said: “We’re working with partners in the smart TV space in order to roll that out more broadly next year.”

“The other thing is we’ll start to curate, if you sign in we’ll start to personalise and editorially curate what shows up as the companion experience, either based on what programme you’re watching, what channel you’re on or what we happen to know about you,” he said.

Rivera also commented on the continued evolution of the iPlayer, from PC-based catch-up service to multi-screen programming portal, with the BBC also now starting to debut new shows and air exclusive short-form content on the platform.

“The creative community is starting to see the potential of IP-based platforms, not just in terms of new formats, but in terms of reaching the audiences that they’re interested in reaching,” said Rivera.

He added that iPlayer usage on tablets has now surpassed mobile and said “I don’t even think that we’ve scratched the surface of the potential of iPlayer on TV.” He also tipped the BBC to beat the 2.32 billion programmes viewed on the iPlayer in 2012, saying this “will continue to grow year-on-year.”

“I do feel that 2012 was a pivot point for digital and for mobile and video online – I hope with greater reflection people will agree that that’s the case,” Rivera said.

RT @ViaccessOrca: Missed our session on securing your revenue in the new age of video piracy? You can listen on-demand to us discuss the is…
30 September 2020 @ 14:07:55 UTC