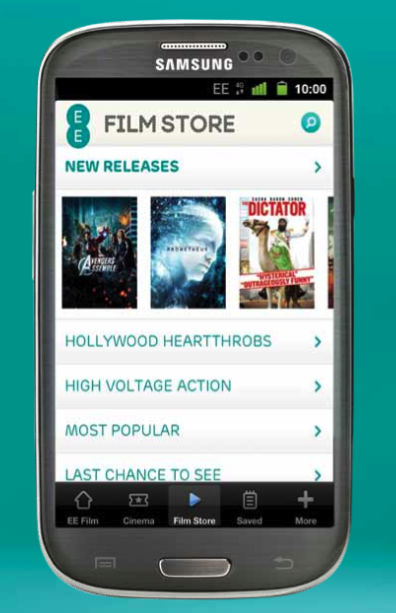 UK mobile telecom provider Everything Everywhere (EE) is to offer a film streaming and download service from video-on-demand specialist FilmFlex as part of its 4G mobile and fibre-based broadband launch next week.

EE’s Film Store will allow users to stream or download one film a week free of charge, with no additional data charge, until February. Other titles can be streamed or downloaded on an à la carte basis, with prices starting at £0.79 (€0.97), with the cost charged to customers’ mobile bills or credit or debit cards. The Film Store will offer a transactional VOD service, with no subscription element.

Customers have 30 days to start watching a film once it’s rented, and then 48 hours to finish it once viewing has commenced. They can download films of their choice on to their device or they can stream films on up to three compatible devices.

The Film Store will have 700 titles available in total, with customers able to watch films on mobile phones, PCs or TVs via their laptops. Pause and play functionality, allowing viewers to start watching on one device and finish on another, will be available. FilmFlex, which provides Virgin Media’s VOD service, has movie supply deals with the six major Hollywood studios, the UK’s leading independent distributors and international distributors including Sony Pictures, Twentieth Century Fox, Walt Disney, Warner Bros, Entertainment One and Momentum Pictures. The operator is also promoting the service with a ‘two-for-one’ cinema ticket offer each Wednesday.

EE will launch its 4G mobile service on October 30, along with fixed-line fibre broadband services. The 4G service, 4GEE, will offer speeds five times faster than 3G, according to EE, and will be available in 10 cities across the UK initially. A further six cities will be added by the end of the year, with 98% of the UK population to be covered by the end of 2014. The fibre broadband service, available to consumers and businesses, will be available in 11 million premises nationally, with price plans starting from £15 a month, according to EE.

Existing Everything Everywhere, Orange and T-Mobile stores will be rebranded as EE stores from October 30.