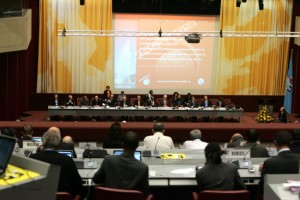 The possible allocation of spectrum in the 700MHz band, used for digital broadcasting in Europe, to mobile services will be considered at the next ITU World Radiocommuniction Conference (WRC) in 2015, despite opposition from the European Broadcasting Union (EBU) and others.

The ITU said that the issue had been placed on the WRC-15 agenda together with the need to consider additional spectrum allocations for mobile services.

The EBU has pointed out that the move presents a threat to digital-terrestrial broadcasting in Europe. It has said that any potential future allocation must consider compatibility with existing broadcast services.

Mobile telco organisation the GSMA welcomed the move to keep the 700MHz spectrum on the agenda. “The GSMA is extremely pleased that many countries have recognised the need to secure the future of Mobile Broadband and along with our members we stand committed to the success of the ITU’s work,” said Anne Bouverot, director-general of the GSMA. “By taking action now to secure more spectrum, mobile operators will be better positioned to meet the mobile data needs of billions of consumers well into the future. We look forward to working with governments and regulators over the next three years to identify the spectrum needed to deliver the vision of providing low cost, ubiquitous broadband all over the world.”

Emerging market service providers also welcomed the move, which had been pushed at WRC-12 by African and Arabic administrations keen to secure additional spectrum to meet rapidly expanding demand for mobile broadband services.

Separately, WRC-12 mandated the ITU Radiocommunication Bureau to initiate enquiries to administrations to provide more detailed information on the movement of satellites from one orbital position to another. The conference also moved to improved the satellite coordination by reducing the coordination arc in parts of the most congested spectrum and agreed to look into the possibility of further reductions.