Eurosport’s mobile apps have been downloaded five million times since it launched two years ago. 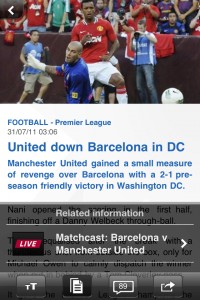 Eurosport launched its free Eurosport.com app for iPhone in nine languages two years ago and it was downloaded over one million times in the first three months. In May last year, it launched a premium streaming Eurosport Player live streaming app for iPad and iPhone users in the UK and Ireland, France, Germany, Austria and Switzerland, providing live and on-demand access to Eurosport’s TV channels. In December, an updated version of the Eurosport.com app went live with improved functionality including live goal alerts.

“In just a short time, mobile has become a very important part of Eurosport’s multimedia offer and it is now key to helping us deliver on our brand promise of giving fans the best sports entertainment experience on the device of their choosing,” said Laurent-Eric Le Lay, Eurosport chairman and CEO. “The strong consumer engagement figures are good news not only for the sports fans but for our clients and advertisers, as we can guarantee the right multimedia environment in which to raise awareness of their brands.”