MBC’s Shahid to be MENA home of WWE 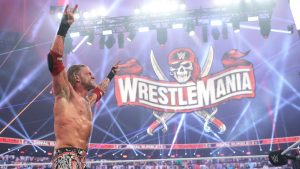 Mixed martial arts giant WWE has teamed up with Middle Eastern media outfit MBC Group in a broadcast partnership that will see MBC’s video on demand streaming service, Shahid, become the new home of WWE in Saudi Arabia and the rest of the MENA region.

The partnership includes all WWE premium live events, kicking off with WrestleMania 38 on April 3 and 4.

Beginning March 26, Shahid will air SmackDown live on Saturdays at 04:00 KSA in Arabic, with a one-hour version of SmackDown then airing the same-day with Arabic subtitles on MBC Action at 21:00 KSA.

Beginning Tuesday, March 29, Shahid will air Raw live on Tuesdays at 4am KSA in Arabic, with a one-hour version of Raw then airing the same-day with Arabic subtitles on MBC Action at 9PM KSA.

“MBC Group is a market leader in the region and a great partner for WWE. By delivering our premium live events including WrestleMania and SummerSlam, our weekly programming including Raw and SmackDown, as well as WWE’s massive library, we believe we will expand our reach throughout the Middle East and North Africa,” said WWE president Nick Khan.

Natasha Hemingway, chief commercial and marketing officer at Shahid, said: “It’s no secret that WWE is massively popular in Saudi Arabia and the rest of the MENA region. This new partnership is sure to be incredibly exciting for fans, and with more and more live sporting events – including WWE – coming to the Kingdom, we cannot wait to see where this partnership takes us. We’re delighted that Shahid will be the home of WWE!”