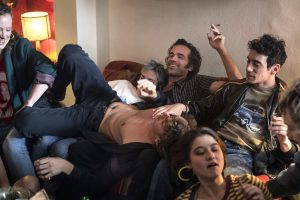 Canal+ Austria – the joint venture between the French pay TV operator and A1 Telekom Austria – is to launch as a streaming service and accompanying linear channel from tomorrow.

The streaming service will provide three simultaneous streams on up to five devices for €8.99 a month. It will include exclusive original content from Studiocanal, films from Kinowelt TV, Filmtastic and and series from Starzplay.

Canal+ says the content offering will include over 250 Austrian movies, entertainment shows and series.

Apps are available for iOS and Android devices and most smart TVs.

The linear channel, Canal+ First, will be available on A1 Xplore TV and HD Austria – the existing pay TV offering from Canal+-owned M7 Group. Canal+ said that other network operators are expected to follow.

“We can finally announce great news today. With Canal+ we are actually bringing the first genuine hybrid television offering to Austria. This means that you can sit back and simply enjoy the programming of our linear channel or select your favourite films and series yourself via the Canal+ streaming service – at home on the TV or on the go on your mobile device,” said Philipp Böchheimer, at a press event at the end of last week.